If you're just starting on guitar and don't know much about this instrument, the information in this section will help you get familiar with the basics.

Learning how your instrument functions is vital towards becoming a successful guitarist. Once you have an understanding of all the parts of your guitar and how they work together to create sound, you'll be better equipped to manipulate your instrument to get the sound you want.

There are two types of guitars: acoustic and electric. Guitar makers build acoustic guitars so they can be played without amplification. Electric guitars require an amplifier to produce a sound loud enough to hear well. Several guitar parts are common to both acoustics and electrics, others are specific.

Watch the video below to learn about the different parts of an acoustic guitar.

Like any field of study, the science and art of playing guitar is filled with its own terminology. In order to play the guitar and interact with other musicians and guitarists, you'll need to have an understanding of key terms. Below are some key terms defined.

Guitar pick (or plectrum) is a flat, triangular device used to play notes. Note the picture below

Guitar string is the lengthy, metallic wire is pulled across the length of the guitar, running from below the sound hole (or pickups) to over top of the head. The term "note" refers to the striking of a single string to produce a sound. The sound that is generated from the pluck of a single string is referred to as a note. The sound of a note can be manipulated by pressing the strings down on the fretboard, and by playing different strings as well.

Guitar chord is a set of notes played on a guitar played simultaneously or sequentially.

Each of the six strings on your guitar has a name so that you can easily identify it. These strings are identified below - this information will serve as a stepping stone to getting the sound you want out of your guitar, so it is important to master the material.

The strings have some clear patterns with respect to their naming conventions and their positioning on the guitar: The strings are numbered one through six starting with the bottom string. Starting from the low E string to the high E string, each string gets thicker and produces a deeper sound. In particular, the 4th, 5th, and 6th strings are referred to as the bass strings, as they produce a deeper, fuller sound.

Here's a video that runs through this same topic.

How to hold your guitar

Being sure to hold your guitar properly is something that is extremely important, but is often overlooked by many beginner guitarists. How you hold the guitar is something that easily becomes habitual, so it's important to learn how to hold the guitar properly from the start; otherwise, bad habits will develop. Holding the guitar correctly is simple; there are only a few key matters that you need to be aware of. These are outlined below.

Knowing how to tune a guitar properly is invaluable for your success as a guitarist and something that everyone should know. Here below we'll be talking about standard tuning (EADGBe) - most popular songs are played in this tuning which makes it best for a beginner.

Watch the video below to learn how to tune your guitar

What is tab (or tablature)?

Tab (or tablature) is a method of writing down music played on guitar, bass, drums etc. Instead of using symbols like in standard musical notation, it uses ordinary characters and numbers. Tablature is possibly the best way to learn music for those who don't know special music notation.

How to read tabs?

In order to understand tab, you need to visualize a guitar neck as if you're playing guitar and looking down on the neck. Tabs usually consist of 6 horizontal lines that represent the strings of the guitar. The top line is the thinnest string (first) and the lowest line represents the thickest (sixth) string. The first thing you have to know is the name of the six strings. The thickest string is called the 6th string or E string because it plays an E note at an open fret (when you don't hold down any frets and just pick the string), assuming standard tuning. The next string is called 5th string or A string for similar reasons. The other string in order are 4th or D string, 3rd or G string, 2nd or B string and 1st or e string (thinnest string). As the 1st and 6th string are both E notes, we'll distinguish the 1st string by writing it in a smaller case "e".

The next thing you notice on a tab is the numbers. The numbers represent frets. 1 means 1st fret, 2 means second fret and so on. A 0 (zero) means an open string. You will only ever play the strings with numbers on; if a string has no number, don't play it. For example:

Tabs are read from left to right. The tab above means, that first you should play D string on an open fret, then G string on the 2nd Fret, then B string on the 3rd fret and so on. If you know your chords, then you would notice that this tab plays the notes of D major chord.

The difference between this tab and the first tab is that here multiple strings are hit at the same time, thus indicating strumming. At first you hold down an A and D string on the 2nd fret and G string on the 1st fret and play all 6 strings. If you know chords, then you would notice that this is an E major chord. According to the tab, E major chord is strummed twice. The next chord is A-major which is strummed once and then D-major is strummed twice.

The video below will explain you more about guitar tablature

The numbers in tabs don't really describe the subtle techniques that a guitarist can execute, so below are the tablature symbols that represent those various techniques.

A hammer-on is played by sharply bringing a fretting-hand finger down on the fingerboard behind a fret, causing a note to sound.

A pull-off is performed by plucking a string via "pulling" the string off the fingerboard with one of the fingers being used to fret the note.

A bend is done when you push up or pull down a string in order to get a different pitch, and it's often used in solos.

A release is done when a string is already bent and you're letting go of it.

Vibrato is like a constant rhythmic bending of the string. You do a bend up and bend down quickly to create a moving sound.

To perform a slide, start off by plucking a first note and then slide up or down to the second note on the same string.

A palm mute effect is achieved when you take the side of your strumming hand and lightly place on the strings at the edge of the bridge. This will produce a muffled sound.

Let ring marker tells you to let that note ring until the end of the dashed line.

A ghost note is played softer, without emphasis, by fretting a note, rather than picking it.

A dead note effect is achieved by lightly resting your fretting hand across the strings without actually pressing the strings against the fret.

Upstroke is a strum running from the high E string up to the low E string. Downstroke is done from low to high.

Unlike regular text tabs, Tab Pro allows you to view and hear the tab as it's being played, with rhythm notation exactly telling you when to play a certain note/chord and how long to hold it. The basics of rhythm notation are explained below.

Music is based on time. Most songs have a steady, recurring pulse called the beat. It’s the steady rhythm to which you want to tap your foot or dance. The element of time in a piece of music revolves around the beat.

Each track in the tab contains information on it's time signature, located usually at the beginning. The top number in the fraction stands for the number of beats in a bar (in most cases it is 4). The bottom number stands for the note value that is equal to the beat of the music. In most cases the bottom number is also 4, which indicates that the 1/4 note is the pulse of the music. In other words, 4/4 time means each bar is equal to 4 1/4 notes. 4/4 is the most common time signature. Other popular time signatures include 3/4 (aka "waltz time") and 6/8 (used in "Nothing Else Matters", "We Are The Champions", "House of the Rising Sun" etc). 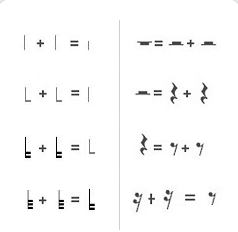 Rhythm notation is created by altering the appearance of notes to indicate the relative duration that these notes occupy within a tab. Conversely, rests describe the relative length of silence. Notes can have different durations. A note’s duration is not expressed in seconds, but as a multiple of the tempo. A quarter note is one beat. The tempo is expressed in bpm (beats per minute).

Notes and rests can be attended by a small dot, appearing just to the right of the rhythmic element. This increases the duration of the note or rest by one half.

It is common for smaller valued notes to be grouped together via beams. Grouped notes usually have the length of one beat. Rests are never beamed.

When a pair of dots accompanies a double bar, it signifies that you must repeat music either from the very front of the piece or front the previous repeat symbol as follows.

A section will often have a different ending after each repeat. The example below includes a first and a second ending. Play until you hit the repeat symbol, jump back to the previous repeat symbol (not shown on the picture) and play until you reach the bracketed first ending, skip the measures under the bracket and jump immediately to the second ending, and then continue.